Following on from External Data Sphinx Extension, a natural requirement is the ability to automatically generate not just content on a single page with your extension, but also content on wholly new pages!

The story so far

You can find all the code for this example in the repo here: https://github.com/Sam-Martin/sphinx-write-pages-tutorial

If you’re confused about what Sphinx is, why you would want to write an extension, or how to get started, you should check out the start of the External Data Sphinx Extension post.

The basis for this example

My basis for writing this example in this fashion is by following along the approximate process of the built in autosummary extension provided by Sphinx.

You can see the full code for this extension on GitHub. Any mistakes I make in this implementation are my own, and you should defer to the autosummary extension as the canonical way to do this if you want a more complete example.

We’ll start with the usual Sphinx build and creation of an _ext subfolder. 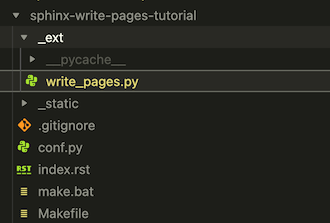 As we open up our new write_pages.py we’ll need to create four things.

The setup function and <something>Directive class we’ve seen before, so what are the other two?

This is the class that is going to write our .rst files to disk so that Sphinx can discover them and render the rst within into html/pdf/whatever. This needs to be seperate from our directive because it needs to run on the builder-inited event which we will subscribe to with app.connect() and which does not provide the arguments required to instantiate our directive.
We also use it as the source of truth for our list of files.

Getting lists of files from directives

Creating custom directive parsing is well outside the scope of this tutorial, so we’ll be using a simple list as a class property on WritePages as our source list of files to create.

This function is a little shim that instantiates our WritePages class and calls the write_pages method on it. In theory we could have the main function write the pages itself, but we need a source for the list of pages that’s accessible both in the main function and in our ListPagesDirective class.

For brevity I’ve omitted the parse_rst method contents, again you can see the full implementation in GitHub.

Let’s go through this one step at a time.

Tip: The WritePages.write_pages method wants the file names with .rst but when writing the toctree in ListPagesDirective.run we want them without the .rst extension. This always catches me out when writing one of these!

We can now use our list-pages directive to add a toctree!

And now we can run

Now you’ll notice that your folder now has 10 new files in it!

And when you open your new _build/html/index.html file you will see your rendered toctree and the links to the newly created files!

🎉 Congratulations! You’ve written a Sphinx extension that can organise your auto-generated documentation into multiple sub pages!

On the deletion of files

If you play around with the list of files specified in WritePages.files you may notice that there’s no mechanism to delete the files. This behaviour reflects that of autosummary.

If you have extremely volatile file lists and are likely to be frequently orphaning pages it may be a good idea to configure your extension to write your files to a dedicated subfolder that’s deleted as part of your make command.