It’s been a fair few months since my last post in this series (or at all for this matter) and I haven’t made anywhere near the progress with Chefifying (definitely a word) my environment as I would like due to new more urgent projects.

Since my last post, HashiCorp has announced Atlas as a tech preview, which (in part) replaces VagrantCloud which I referenced in part 3. HashiCorp are placing Atlas as a solution to a large portion of your DevOps deployment lifecycle. 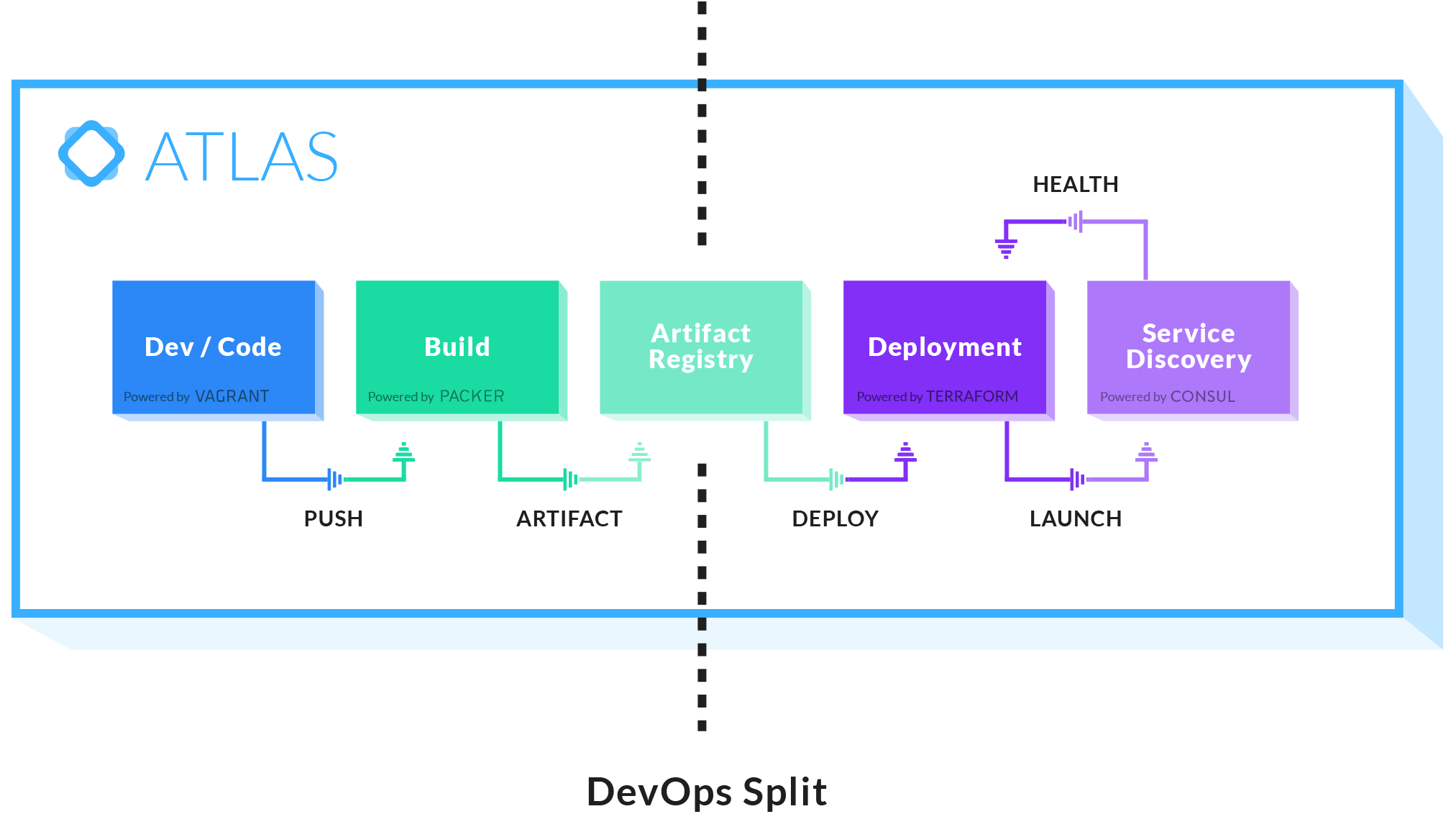 This is powered by four components:

Atlas looks to be the wrapper that ties all these together to make it easy to manage vagrant boxes, terraform deployments, packer images and consul configurations in a single place as a coherent pipeline.

Terraform looks very interesting to me as it’s placed in a CloudStack style space but looks much lighter weight. But currently we’re only interested in Vagrant and by extension Vagrant boxes and Vagrant Cloud.

So what happened to Vagrant Cloud?

Well the good news is that all existing VagrantCloud Boxes and URLs still work, so in theory Part 3 will still work for everyone!

However, for some reason, when you search Atlas for “Windows” the kensykora/windows_2012_r2_standard box we were using no longer shows up! 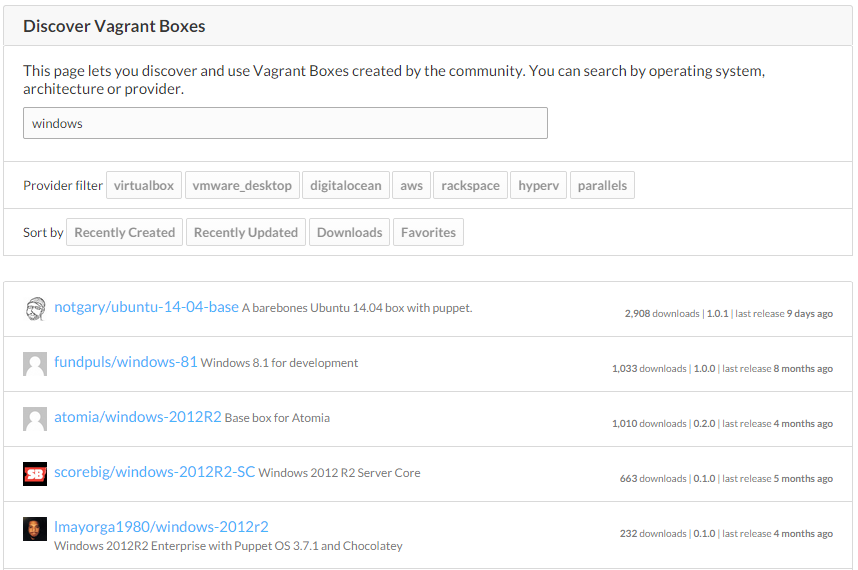 No idea why as it still exists, but anyway this gave me a good excuse to play with Packer!

Why? Well, initially I thought kensykora’s Vagrant box had disappeared which was what caused me to look into this in the first place, but there are a few additional reasons:

Like pretty much every tool in this space it has its origins in in the nix world, but fortunately all the hard work of creating Windows packages has been done for us already by Joe Fitzgerald in his freaking awesome Windows Packer GitHub repo.

There’s a lot of stuff going on with Packer, but we’re not trying to explore Packer in depth just yet. All we’re trying to do is roll a Windows 2012 R2 trial Vagrant box with the minimum amount of fuss.

Well… I say install, more like extract and add to your path environment variable.

Where “C:\Users\smartin\Documents\packer” is the path you extracted packer to.
You could of course set it using the GUI like a normal person if you prefer!

Go to https://github.com/joefitzgerald/packer-windows and hit the “Download Zip” button. 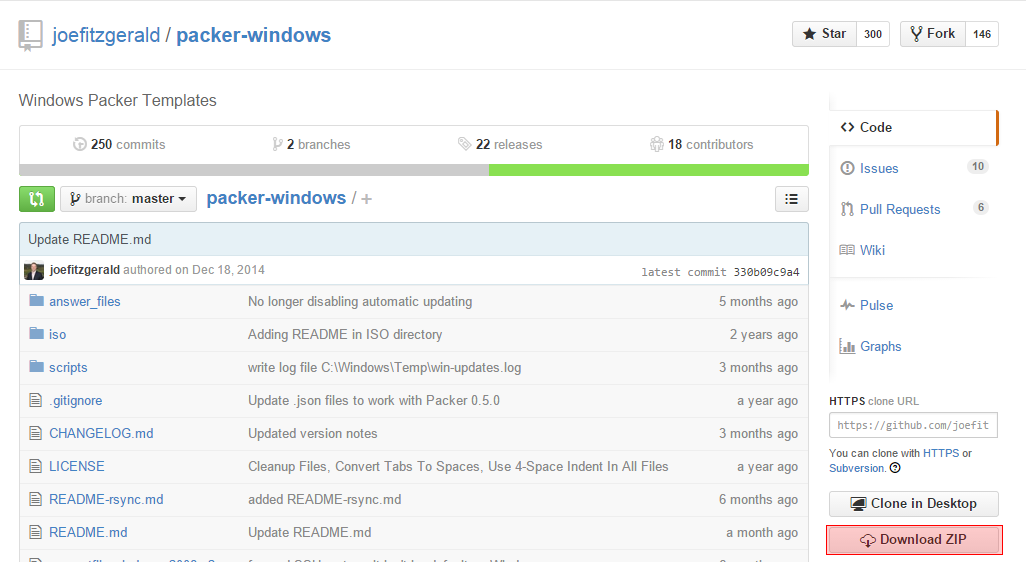 Then extract the Zip to wherever you like (though preferably on a hard disk with some space as this directory will be where the ISO is downloaded to AND where the resultant box file is created).

Okay you don’t *have * to disable Windows updates, in fact, if you’re building a golden image for a production environment you absolutely should not do this step. However, if you’re just trying to get a 2012 R2 Vagrant box built as fast as possible (i.e. in less than an hour!) then follow Joe’s steps to disable Windows Updates, which are:

Open the directory to which you extracted packer-windows-master. 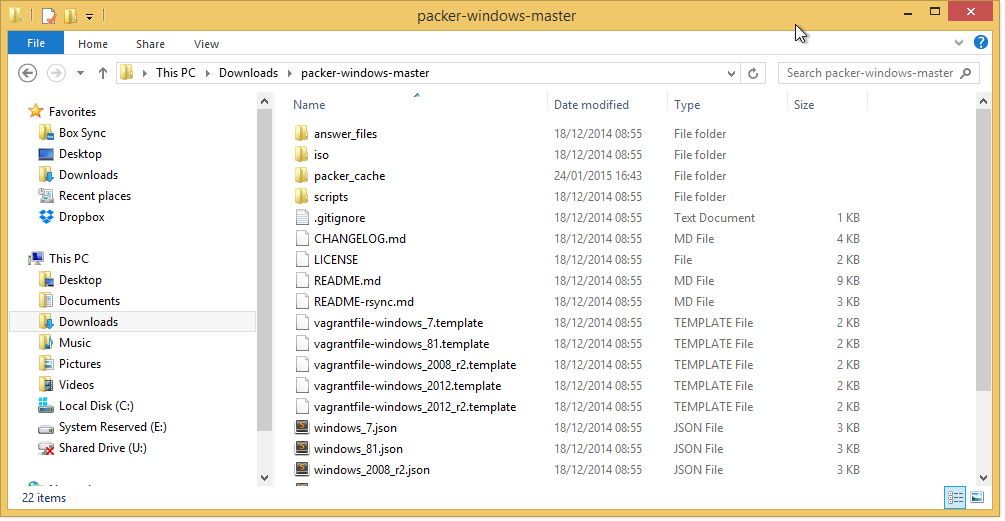 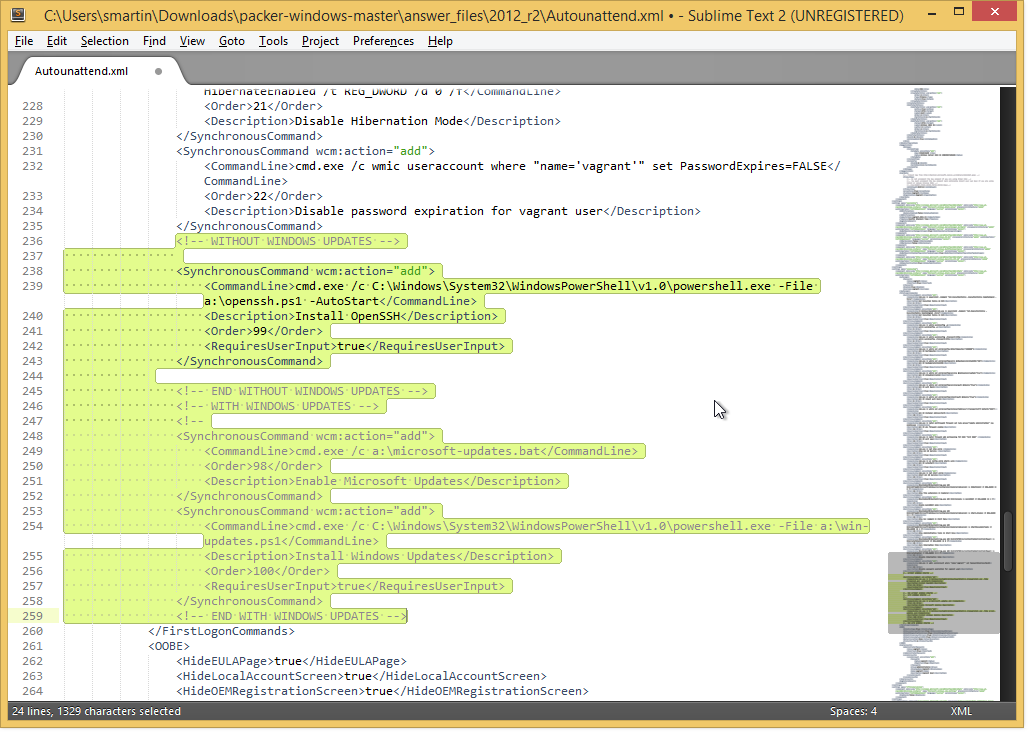 This will cut out a lot of time for the packer build!

Next, open up packer-windows-masterwindows\_2012\_r2.json and change the virtualbox-iso headless value to false. This isn’t strictly necessary, but helps you see what’s going on and appreciate how awesome it is that you don’t have to do all this by hand! 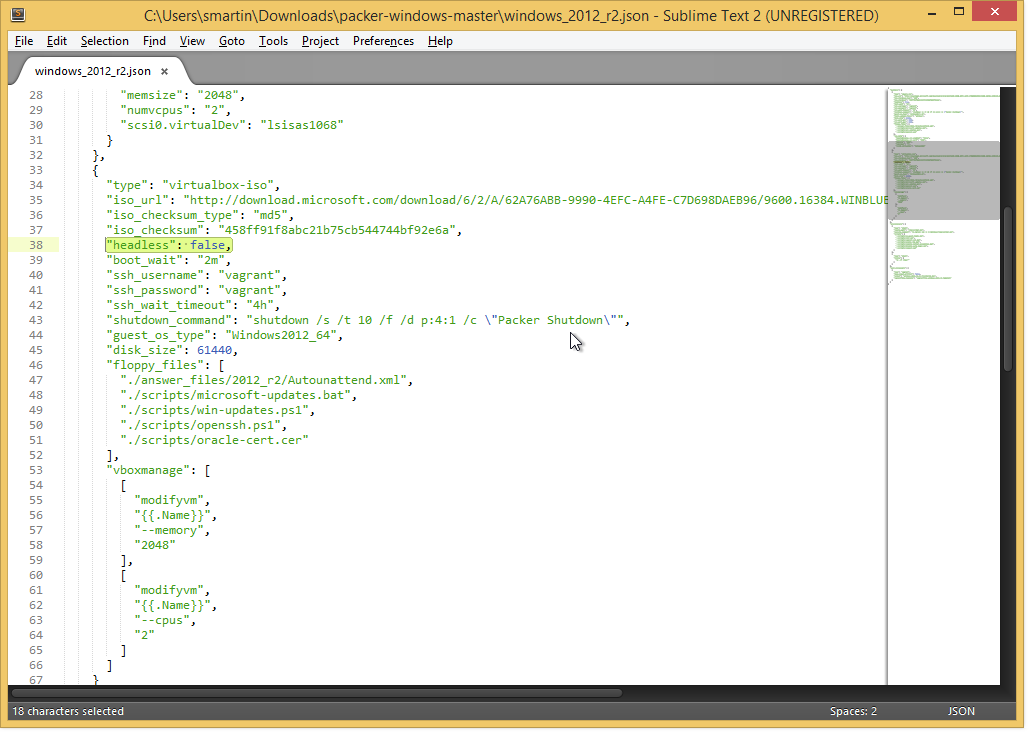 Save, that, open a PowerShell window and CD to your packer-windows-master directory and run:

then once that returns successfully

This will take a while to run as it does the following: 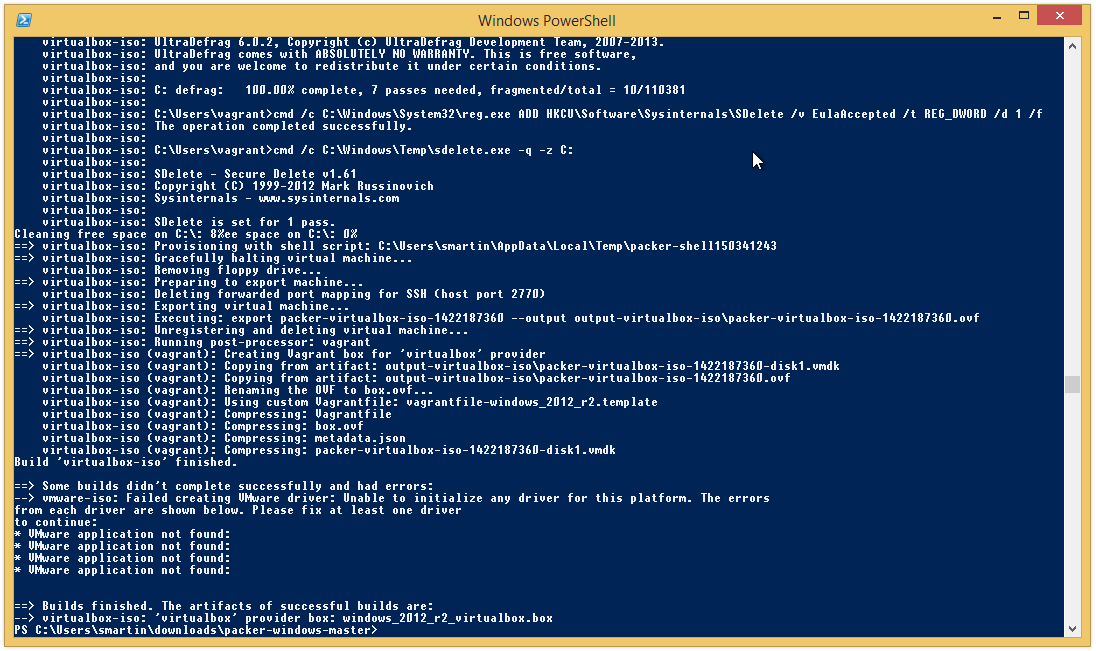 This will throw errors about VMwareapplication not existing, but that’s fine, we don’t want a VMware template.

Finished? Then let’s proceed to register it.

Step 4) Register the box with Vagrant

Now, you’ve not had to do this in any of the previous guides because we always used Vagrant Cloud for our Vagrant boxes. But this time we need to tell Vagrant about the new box we’ve just created!

The name is completely arbitrary, do change it for your purposes, and the location obviously has to be amended to reflect where your packer-windows-master directory is!

Vagrant Omnibus is a Vagrant Plugin that ensures Chef is installed on your Vagrant box as part of the provisioning process (much neater than my messy PowerShell script in Part 3).

With that done you can create a new folder (wherever you like) for your vagrant project. Mine’s called vagrant-base-2012R2 but it really doesn’t matter.

In that new folder, create a file named VagrantFile (no extension) and paste the following into it:

Most of this should be familiar from previous parts, but the important bit to change is the name in config.vm.box as this must match whatever name you passed as part of vagrant box add.

Once that’s created, VAGRANT UP! 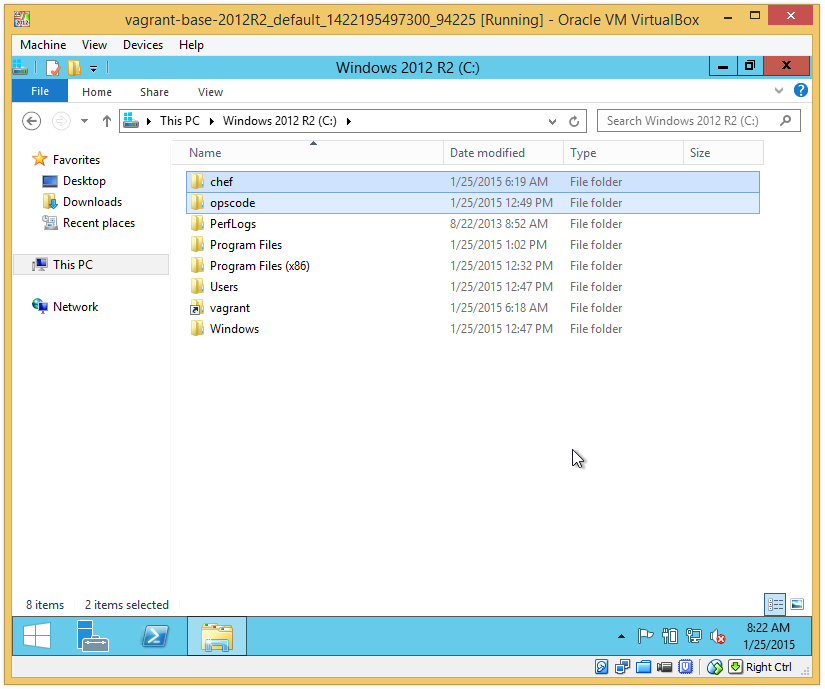